The June Fete is a registered trademark of the Abington Health Foundation (AHF) Women’s Board and is the broad term representing all its annual fundraising to benefit Abington - Jefferson Health, an expanding regional health organization serving Bucks, Montgomery and Philadelphia counties. This umbrella of fundraising includes the Women’s Board annual Special Events, Auxiliary scholarship fundraising, the Gala Program Book, vendor contracts, and concludes each year with our trademark event, The June Fete Fair. The AHF Women’s Board is a non-profit organization of volunteers in support of Abington Hospital. All our proceeds benefit services and programs to meet community and patient needs at Abington and Lansdale Hospitals by supporting medical education, community programs, building expansions, equipment purchases, and assisting patients with special needs.

History of the June Fete Fair 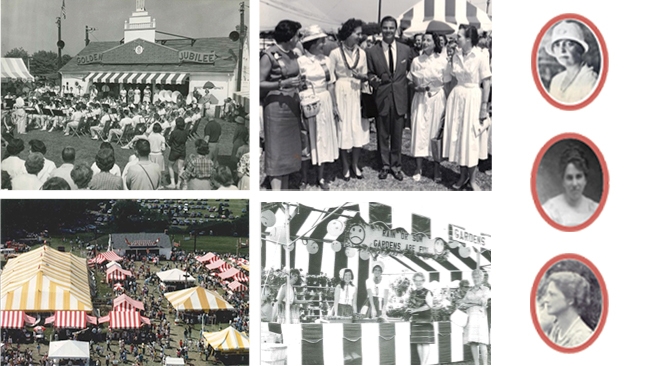 Our organization began with a community vision, the need for a local hospital in Abington. When a campaign was called in 1912 to raise funds, women in the surrounding communities gathered together to answer the call. Three key founding members were instrumental in bringing this vision to life. Mrs. Charles Kruger, first president of the Women’s Board, worked diligently in creating community support in all the surrounding neighborhoods of the hospital. Natalie Fox Elkins, wife of Abington Memorial Hospital’s first president, George Elkins, Jr., served as “the eyes and ears” for identifying hospital needs and was an honorary 2nd Vice President of the Women’s Board throughout her lifetime. Louise Elkins Sinkler, daughter of AMH founder George Elkins Sr., dedicated more than 60 years of service to the Women’s Board. Through their skillful organization of early fundraising efforts and securing community donations, Abington Memorial Hospital opened in May 1914 with all patient amenities in place.

The June Fete Fair evolved from its humble beginnings as street fairs, lawn fetes, and holiday bazaars held to raise funds for the hospital opening. In 1913, the Women’s Auxiliary voted to use their past successes as a basis for creating a major annual fundraising event. The Elkins family generously offered their estate as a location for a June event.

The 1913 Garden Party Fair must have been a sight to behold. Picture the sweeping landscape of the Elkins Estate, Latham Park, complete with beautiful English gardens, manicured lawns and festive booths. Both coaches and “new fangled” cars would stream through the gate and up the long drive as patrons arrived. Imagine the ladies in lawn dresses with fancy umbrellas, men in bowler hats, and children brimming with excitement as they arrived at the fair. Fresh produce, flower marts, and games to play would have been the offerings in the booths, while the terrace of the mansion was set for refreshments and afternoon tea.

The annual Garden Party Fair continued with new attractions added each year. In 1918 Mrs. George Horace Lorimer volunteered to be chairman. She introduced the idea of an annual theme and was responsible for cloning the phrase The June Fete. At the turn of the century the word "fete" represented an event that had a theme. She served as chairman for 16 years and dedicated herself to elevating The June Fete into a lavish East Coast event, attracting patronage from around the country. A fashion show was added and it became the premier attraction of the fair, with young debutantes as models. The June Fete dress was introduced in 1921. It became a major fundraising item sold at the fair for decades to come.

During the 1930's, the location of the fair moved among many grand local estates including "Lindenhurst", the John Wanamaker Estate, "Ashbourne Hall", the William Elkins Estate, and "Crosswicks", the Clement Newbold Estate. The annual June Fete had become so well known that PATHE NEWS AGENCY started filming the event each year. The event "runners" were distributed to movie theaters around the country.

The Silver Jubilee was celebrated in 1922 with the addition of a Pony Show and a year later a Horse Show was added as a permanent fixture of the fair.

By the 1940's, the Depression and the advent of World War II took their toll on volunteer support for the fair. Using great ingenuity, the women including Louise Elkins Sinkler and Mrs. Wunderle held "Imaginary Fairs" in 1943 and 1944, during which donations were sought without the need for attendance. An astounding $38,000 was realized as the community rallied around this cause. As the war ended, the fair returned to its former stature, once again with the help of the Elkins family, who offered their "Justa Farms" property in Huntingdon Valley, as a new site for the next ten years. Sporting its own racetrack, a large lake and acreage sufficient to accommodate horse shows, dog shows and car shows, this proved to be an ideal new location for introducing many novel activities never before seen at the fair including fishing contests and a mini go-cart track for the kids.

With the formation of auxiliary units in 1950, a host of community volunteers were added, and with their support came fresh ideas and much enthusiasm. The auxiliaries assumed responsibility for chairing many of the booths. The June Fete Dress committee expanded its line to include men’s and children’s clothing. An annual catalog was published and sold highlighting both the hospital and the Women’s Board and its Auxiliaries.

For the next decade, the auxiliaries hosted "A Day in Willow Grove Park" for the surrounding schools, featuring guest appearances by the likes of Dick Clark, Bert Parks, Sally Starr and Captain Noah.

In 1955, an impressive parcel of land was generously donated by the Pitcairn family to serve as a permanent location for the June Fete Fair and Horse & Pony Show. Dubbed "The June Fete Farm," it has been the home of the fair since that time.

Community involvement and support for the fair hit an all time high in the early sixties and The Golden Anniversary of the June Fete Fair was celebrated in 1964.

As one of the earliest continuous running fairs in Montgomery County, The June Fete Fair annually draws more than 25,000 community members throughout the weekend. We are proud of the rich history this fair has brought to our community. The dedication of all the thousands of volunteers working towards a common goal for more than 100 years is unmatched!

Today our organization continues to build on the strong vision our founders created and is dedicated to continuing volunteer service and fundraising for Abington - Jefferson Health. The AHF Women’s Board extends its gratitude to all the women, their family members and the community volunteers who have joined us in our mission. The Women’s Board and its Auxiliaries is proud of its past and enthusiastically looks toward the future. 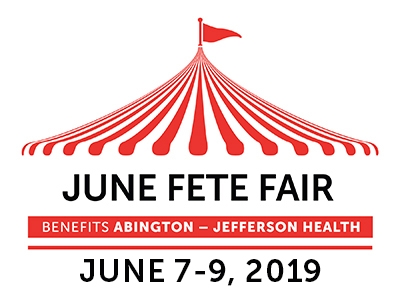